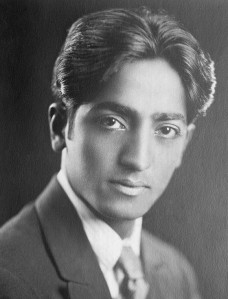 hen I was young, I knew of renowned philosopher and spiritualist, Jiddu Krishnamurti (or “Krishnaji”) because of the school he had founded. It was where my brother and the entire passel of my cousins boarded and studied. When these Rishi Valley kids get together now, it’s like they speak an entirely different language….it’s almost like a cult – one I never belonged to. Hmmmmm, now should that thought be followed by 🙂 or 😦 ? Hard to say…

Anyway, while a student, I remember one of them saying that he had just been to one of Krishnaji’s talks at the school. Not understanding what a privilege that was, he said, that most of what Krishnaji spoke about went completely over his head.  He added, I think he is really speaking to the older people.  🙂

Not too far back, I bought and read two of Jiddu Krishnamurti’s books – Life Ahead: On Learning and the Search for Meaning and To Be Human. From strictly a curiosity point of view, I’m glad I read them but I must admit that he did not get through to me too well with these writings.

Much more recently one of my cousins took the rare action of sending a quote to his close-family email distribution list. It was a quote by Jiddu Krishnamurti. Now, this definitely resonated! And of course I had to record/share it. See if resonates with you too-

“When you call yourself an Indian or a Muslim or a Christian or a European, or anything else, you are being violent. Do you see why it is violent? Because you are separating yourself from the rest of mankind. When you separate yourself by belief, by nationality, by tradition, it breeds violence. So a man who is seeking to understand violence does not belong to any country, to any religion, to any political party or partial system; he is concerned with the total understanding of mankind.”

Then, in response to reading this, another one of my cousins piped up (this one seldom does). He said, This is John Lennon’s  song ” Imagine”.  And guess what, it is indeed! What a strange connection he made so quickly. Beautiful!

Here are the lyrics; do you see it?

Imagine all the people
Living for today

Imagine there’s no countries
It isn’t hard to do
Nothing to kill or die for
And no religion, too

Imagine all the people
Living life in peace

Imagine all the people
Sharing all the world

You, you may say I’m a dreamer
But I’m not the only one
I hope someday you will join us
And the world will live as one

So that’s how I happened to come upon this most unlikely but inexplicably fantastic (coincidental?) kinship between Jiddu and John.

May they both be at peace.

You know, all of us on earth still have a long way to go to get there…