← Holiday Traditions and Delightful Journeys
No Jinx On This Holiday →

The Bane of Inheritances

“You don’t have to be dead to leave a legacy.”
― Onyi Anyado

Is there some written (or unwritten) rule that says we need to bequeath all our worldly goods to our children and descendants?

And by so doing, are we doing more good or harm?

These questions have been nagging at me recently and I do believe I am close to reaching some conclusions.

Not a rule but a common practice the world over, I submit that it’s completely unproductive and even harmful to bequeath all your worldly goods to your heirs. Therefore, in my humble opinion, it may just be time for this practice to be throw out the window.

Closer to home, it’s definitely not my imagination that as India “emerges” or “transforms” or “shines” or “rises” or _____ [use another buzzword that fits what is perceived to be happening to the country– Modi-fies maybe?:) ],  something ugly is also emerging.

Within small and large family units alike, people have begun showing strong tendencies towards greed and self-interest with their new economic prosperity.

This past weekend, yet another Indian-American friend lamented about “family problems” in India. It appears virtually every middle-class (and up – including the Ambanis) family in India has “inheritance problems” these days! I know way too many people with these issues. L

They have resulted in sad break-ups of close-knit families and unprecedented shattering of family relationships which have shocked onlooker friends and extended family members.

It is especially sad for siblings. With them “breaking up” over unfair or unjust or even unlawful divisions of assets, the overwhelming result is an entire breakdown in their family structure, affecting not just them but everyone around them. Things are never the same again.

The problem often and quickly moves from that of financial assets to emotions – ego, betrayal, anger, hurt, bitterness and more – stuff that is much more difficult to overcome.

I don’t have very far to go to understand all of this. In more ways than one, I can relate well to these situations. Therefore, when one friend or another starts discussing their own family problems, I appreciate their sentiments completely.

This all got me thinking about how these distressing situations could be avoided or even prevented completely.

I know that few will agree with me right away but there is a simple, if radical solution.

It may take some convincing to get you to see the light. I know that I had to think about it deeply to reach this point.  But give me a short few minutes, and I will lay it out for you.

What if inheritance was not about money or wealth at all?

What if children knew that they would receive no financial assets from their parents and therefore had zero expectations during their lifetime?

Bill Gates and his giving pledge are a good model to follow even if one is not at the affluent stratosphere that he and his brethren inhabit. Financial assets earned and amassed during a lifetime – your lifetime – can be used productively instead. They can be given back for the good of humanity and the world. What could be better than that?

Hah, “productive” – what an understatement that is!

Think about it. After all, we entered this world with nothing, and we are guaranteed to leave with nothing. No exception.

The last thing we need to leave behind are situations that become the basis of many an unhealthy relationship. When we leave behind our worldly possessions to our heirs, we are in constant danger of leaving behind potentially damaging legacies between our children and within our own families.

So does that mean our children inherit nothing from us?  Absolutely not.

My submission is that they inherit no material possessions or worldly goods but that there’s a whole lot more that you can and need to give them. In fact, what they would receive would be so much more precious!

Moreover they would receive most of it during the lifetime of the parents, not after they are gone.  I call these the invaluable bequests.

Number one on the list has to be an education. This is a minimum mandatory requirement, whatever form it may take.

But wait, there’s more! Here is just a sampling of what you could bequeath instead, teaching by example or with guidance –

These kinds of legacies are priceless and immeasurable. They have the power to reach far and wide. They are treasures that can transcend generations, meant to be handed from one to another.

My dad passed away a decade ago. When I think of him now, do you think I marvel at how much he earned or what financial assets he had? Or do you think I remember what a kind and generous person he was?  Which legacy matters?

Which legacy really matters to you?

WHAT DO YOU DO WITH THAT WORLDLY LEGACY ANYWAY?

I can see you rolling your eyes at this Pollyanna theory of no more worldly inheritances.

But wait, I’m not done trying to convince you. Let me try another approach.

I can put those who inherit financial assets from their parents into four general buckets (and some combination of them) based on what they do with their inheritance:

1. The doers – they take this wealth and put it to good use, building on it, multiplying it over time.

2. The users and abusers – they take this wealth and use it for their own selfish purposes, enjoying it while it lasts and depleting it over time, either rapidly or gradually but depleting all the same.

3. The pass-through generation – they don’t touch this wealth probably because they don’t really need it. They just pass it on to their children along with everything else they have generated

4. The givers – they use this inheritance, not for themselves or their own family, but for the good of others – for humanity and the world at large.

What good did that inherited wealth do for any of the first three types of people above?

Or how about an alternate approach to this – what if they inherited control of the wealth but not the wealth itself? That they did what they needed to do with their family’s legacy but as a job, not an inheritance. Ratan Tata comes to mind.  He came, he built (very successfully!) upon what was already established, he found someone who could carry that mantle, and he left when it was time to go. By doing so, he left an enviable legacy of his own.

The users and abusers…what values did they get out of life if they had it so easy? Other than the temporary pleasures of a hedonistic life style at the end of which, if I were them, I would feel no peace of mind, no sense of accomplishment and be empty of purpose. Simply empty. Worldly inheritances likely cause the most harm to this type of individual.

The pass-through generation, like the doers, didn’t really need all that wealth. They just passed it on to another generation, and guess what? By doing so, they likely created a few monsters – users and abusers, and the vicious cycle gets to continue.

That brings me to me to my real point.

I can’t think of a single reason why we cannot all make life and family relationships easy, fun, strong and productive by being givers – not just of the wealth we inherited but of what we create and can’t use while we live our own short lives.

Sounds like a two for one. Give it away. Then, watch as you 1) do good for your family and 2) do good for the world.  We actually have superb examples to follow.  For instance, one of the pledgers, Manoj Bhargava had this to say (read the first line of his letter below!): 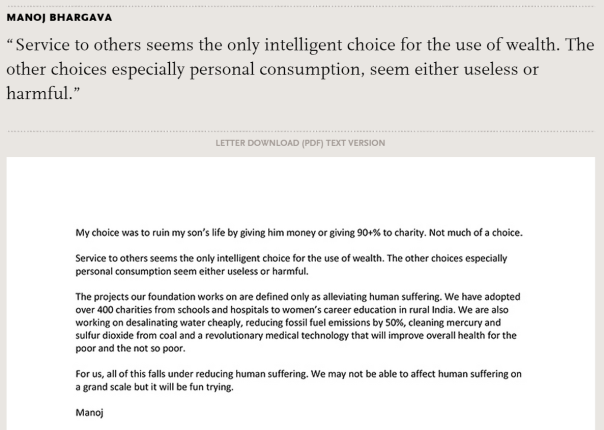 Give me a single reason why this is not a solution. Anyone?

“I had an inheritance from my father,
It was the moon and the sun.
And though I roam all over the world,
The spending of it’s never done.”
― Ernest Hemingway, For Whom the Bell Tolls

Posted on December 20, 2014, in india, people, quality of life and tagged why do you need to leave anything to your heirs, why inheritances can destroy families and individuals. Bookmark the permalink. Leave a comment.

← Holiday Traditions and Delightful Journeys
No Jinx On This Holiday →