The Education Dilemma – Here and There

Everyone Wants to Transform Education

Education is one of those crucial topics raised by people – whether politicians, bureaucrats, academics or industrialists – as having the potential to transform a people, a nation and a world.

The education system in the U.S. and here in India are still so very different. Yet, there are critics of these systems, both here and there. 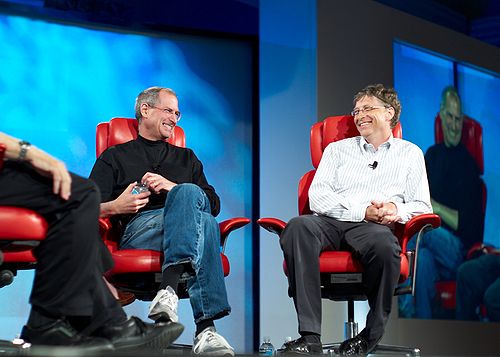 From reading Steve Jobs’ biography, one of the things he really wanted to see changed was education. In fact, on the last visit that Bill Gates made to see an ill Steve Jobs, the two titans spent much of the time discussing how education should be, and the critical role that technology (Duh! What else would these two discuss?) needs to play in educating, not just the US, but the world. A key point they discussed was how most knowledge building needed to happen online, while class rooms were used to discuss, debate, question and clarify.

According to statistics from the U.S. Department of Education, at least the fundamental step related to infrastructure has been accomplished. As of 2008, 99% of all elementary and secondary schools in the United States had internet access. Now, comes the more difficult goal – is it being used effectively to increase the quality of education in the country?

For an example of what is possible, check this out about Salman Khan’s (the other one) Khan Academy – Online Learning, Personalized.

It’s Not Education Budgets That Are Shabby (Relatively Speaking)

In the United States, over 49 million students headed to approximately 99,000 public elementary and secondary schools for the fall 2011 term, and before the school year is out, an estimated $525 billion will be spent related to their education.

Meanwhile in India, about 244 million students were enrolled in schools from pre-primary through tenth grade in 2007 (the latest official numbers I could find).  You can expect that number to be larger by quite a few millions today. In 2011, the government of India increased its total education budget by a laudable 24% to $10.4 billion. [Note the huge disparity in the absolute number, when compared to what the US spends on just elementary and secondary education above!]

What the Critics Say – India

Yet with all these billions being spent, there are various critics of education here and there. In comparing and contrasting the respective assessments, let’s stick to pre-college education to keep this short and simple.

The primary challenges a developing nation like India faces are the access of education for all the nation’s children which has at its root funding issues. But once in school, the critics of its education system say this:

What the Critics Say – United States

Meanwhile,  a developed country such as the US has its own set of critics of the education system there. NY Times columnist Tom Friedman has been a vocal critic, often comparing US students with those from countries such as India and China. Here are some of the shortcomings that have been raised by various people –

* According to a recent article by Fareed Zakaria where he discusses “the real burden on the U.S. economy”, the lack of emphasis on sciences has led to a dire situation for the country. He says and I quote:

“The situation in science education is more drastic. Even with the increase in college attendance over the past two decades, there were fewer engineering and engineering technologies graduates in 2009 (84,636) than in 1989 (85,002). Research and development spending has risen under Obama, but the basic trend has been downward for two decades. In percentage terms, the federal share of research spending – which funds basic science – is half of what it was in the 1950s.”

All Things Considered – An Unfair Comparison

But, truthfully, this is a totally unfair comparison. You have two nations at different levels of development. Both nations can do much to improve their respective education systems, but what each needs to do is quite different. Ultimately both need to recognize their shortcomings and make the changes needed to progress beyond their current state.

Consider that a century ago, less than 10 percent of American kids had a high-school degree, and about two and a half percent had a college degree!  Today, we have a whole different story. Yet, in spite of past progress, debates that rage about the shortcomings in education today are sorely needed because they are part of what drive progress.

Back to India, can this country learn from developed nations on what works, and what does not work? Of course, it can. A balance between the rote learning that has come down the ages, and the more creative, questioning nature of students in developed nations would give students a much more effective platform for today’s global workforce.

You need students who have more than just a disciplined education, you need to produce students who can be creative and innovative. Other Asian nations have the same challenges; they include South Korea and China.

Students from Asian countries continue to flock to the US for higher studies. Why? According to the Institute of International Education, people coming to the U.S. are saying that “we don’t want to continue just being good test takers”. They want classes “that encourage them to think critically, to challenge authority, and be innovative in research across disciplines.”

What these nations need to do is change their education system so that there is a good balance between discipline and creativity. By doing that, they will provide access to these same skills to millions of kids in their native country and home environment instead of having to go abroad to seek them.

Take a look at this article from Time, Teacher Leave Those Kids Alone.  It’s beyond fascinating how South Korea is cracking down on cramming by making after-school tutoring a no-no. They have actually imposed a curfew on these tutoring centers and are going after those who violate the rules! Why? Because the authorities here have realized that there is something fundamentally wrong with cramming – that a focus on this type of education produces the wrong types of students and future workers. That, this is fact is a barrier to progress of the country. Now, that’s what I call vision and foresight!

From where I sit, in India in 2011, what I find, unfortunately, is that the country is still a long way from accepting that this kind of change is sorely needed in education here. Once that realization hits (and one hope it does!), and is acknowledged by the education authorities, I fear that it will still take long decades to transform education organically. What would be wonderful is if India could leap frog some of the developed nations by borrowing their best practices in education.

Have a listen, one of these days.  Whether you are a parent, sister, brother, child, or teacher these will transform how you think about education. Not education here, or education there. But education everywhere.

Excerpts to entice you:

What we do know is,if you’re not prepared to be wrong, you’ll never come up with anything original — if you’re not prepared to be wrong. And by the time they get to be adults, most kids have lost that capacity. They have become frightened of being wrong. And we run our companies like this, by the way. We stigmatize mistakes. And we’re now running national education systems where mistakes are the worst thing you can make. And the result is that we are educating people out of their creative capacities.

If you think of it, the whole system of public education around the world is a protracted process of university entrance. And the consequence is that many highly talented, brilliant, creative people think they’re not, because the thing they were good at at school wasn’t valued, or was actually stigmatized. And I think we can’t afford to go on that way.

If you look at the interactions of a human brain, intelligence is wonderfully interactive. The brain isn’t divided into compartments. In fact, creativity — which I define as the process of having original ideas that have value –– more often than not comes about through the interaction of different disciplinary ways of seeing things.

I believe our only hope for the future is to adopt a new conception of human ecology, one in which we start to reconstitute our conception of the richness of human capacity. Our education system has mined our minds in the way that we strip-mine the earth: for a particular commodity. And for the future, it won’t serve us. We have to rethink the fundamental principles on which we’re educating our children.

What TED celebrates is the gift of the human imagination. We have to be careful now that we use this gift wisely and that we avert some of the scenarios that we’ve talked about. And the only way we’ll do it is by seeing our creative capacities for the richness they are and seeing our children for the hope that they are. And our task is to educate their whole being, so they can face this future. By the way — we may not see this future, but they will. And our job is to help them make something of it.

Excerpts to entice you:

So I think we have to change metaphors. We have to go from what is essentially an industrial model of education, a manufacturing model, which is based on linearity and conformity and batching people. We have to move to a model that is based more on principles of agriculture.

We have to recognize that human flourishing is not a mechanical process; it’s an organic process. And you cannot predict the outcome of human development. All you can do, like a farmer, is create the conditions under which they will begin to flourish.

Final Request: If you know of an educator or someone who can influence an educator – anywhere in the world –  please pass this on to them. Thanks!

Classroom in India: By Myself (Ambuj.Saxena),(cropped by Hidro) (Own work (Self taken)) [Public domain], via Wikimedia Commons