← Countdown: One Hundred Surya Namaskars!
Men and their Make-up →

Every once in a long while, the usual Bollywood rubbish is interrupted by a treasure. Do you know how long it’s been since I wrote a sentence similar to this one?  Exactly.

Without much ado, here’s the official trailer of this treasure. While the trailer does not really do full  justice, it does give you a good idea of what the movie is about:

I will go so far as to say that in this day and age, it’s hard to find a better actor from India than Irrfan Khan. Even with his minor role in Slumdog Millionaire, he made a lasting impact. In The Namesake, he hit it out of the ballpark.

Again in this movie, he demonstrates how he and the main character are integral and entwined – making it difficult to detect the “actor”, Irrfan Khan. Here’s someone who comes across as an unassuming human being (and anything but a Bollywood “star”) but turns into a towering presence as he takes on a meaty (or not so meaty) role. [I can’t wait to see Irrfan in his upcoming movie, Life of Pi, being directed by Ang Lee in which he plays the adult Pi…to be released before Christmas this year].

In this one, his acting is incredibly and finely nuanced such that this movie with its unique story and character turns into a solid showcase for his masterful performance (notwithstanding the cast of solid supporting actors).

It is inspired by the true story of Paan Singh Tomar – who many in India had not heard of prior to this film.  An unheralded national sports champion, he only gained fame and notoriety once he was forced to turn into a dangerous dacoit (dacoit: an armed robber, usually part of a band of them, found in various parts of remote Indian hills and valleys).

The movie also exposes and is dedicated to all the unsung sports heroes of India who are barely noticed by their country and her citizens – unless they play cricket.  Is there any reason to doubt the lack of focus on sports in this country?

I’ll end as I began…it’s extremely rare to find a masterpiece coming out of Bollywood.  Don’t waste this opportunity to enjoy one. Watch it for the story, the direction, the characters, the message…and watch it for the sheer talent of Irrfan. 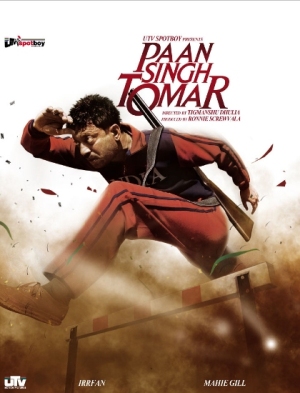 ← Countdown: One Hundred Surya Namaskars!
Men and their Make-up →