← Mom
On A Mission To Transform Education →

Tired of My Salutes to Bill Gates?

If yes, that’s really too bad.  I can’t salute the man enough.

Along came another interview, this time on 60 Minutes, but once again with Charlie Rose. It’s called Bill Gates 2.0 – the man you don’t know.

Here it is, the 60 Minutes interview – 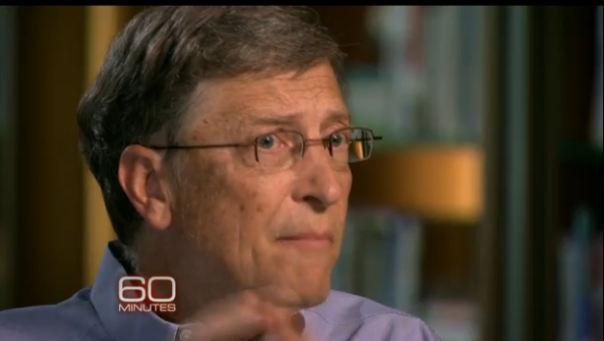 For me it was another power packed interview. Something that made me say, boy I’m glad I got to know about him and that he lived when I did.

Here are many of the things that were touched upon –

Definitely, Bill Gates 2.0! This is not the same man that founded Microsoft.

At one point, Bill Gates does get choked up when asked about Steve Jobs. There’s more about Bill Gates and Steve Jobs here.

In this older interview, Steve Jobs was asked a pointed question about Bill Gates –

“Do you envy Bill a bit about his second act?”

His answer was this:

“His goal is not to be the richest guy in the cemetery. And that’s a good thing!”

Are you one of those who don’t care for Microsoft technology and products? In that case, just think about what some of the resulting proceeds are doing for the good of the world. So, get over it [it’s not bad technology!]. Go purchase some. You’re helping the people who need help the most.

Okay, maybe that’s a bit much.

Just go watch the interview and get inspired –

← Mom
On A Mission To Transform Education →