When did I become a Modi fan?

On one of my normal Sundays a couple of weeks ago, I was in the middle of my weekend chores when I received a text – “Are you watching Modi at MSG?”.

Not being a native or resident of NY at any point in my life, first I had to decipher what MSG meant. Once I had figured that out, I searched online until I found a live online streaming broadcast of Modi addressing a whole bunch of his fans (the normal and rabid kind) at Madison Square Garden. There were thousands of hysterical Indians and Indian Americans filling the massive arena and cheering their rock star. Time for a roll of my eyes.

But once I started watching and listening, something extremely interesting happened.

Modi held my rapt attention from the very beginning until the very end of his speech (despite the unfortunate interpreter whose voice and cadence were both definite negatives).

I can vouch for not being a rabid fan of Modi. Hah. In fact, for months before the election – make that years – I was completely opposed to everything about Modi. He represented the role he played in the Gujarat riots and that pretty much put an end to anything positive I could imagine about the man.

Just watched Modi speaking live at Madison Square Garden. Let me be the first to say that that was amazing and inspiring. Absolutely phenomenal! If he can do half of what he promised, he will still be the best leader the nation has ever had. Please note! This is really me, no one has hacked my fb account.

And I was not being facetious either. I was speaking the honest truth about how I felt. It baffled even me!

So, what exactly did he say that was so inspiring and amazing?

First off, instead of arrogance personified (as I had witnessed a couple of times during his election campaigns) he displayed a semblance of humility. So that set the stage for being like-able.

There was also little mention about religion or Hindutva, both of which would have been certain turn-offs.

Instead, he spoke like a businessman. And India was his business. Like any good businessman, he spoke about the people, potential and competitive advantages that he was going to leverage in order for the nation and its people to grow and prosper economically.

His vision for a clean and prosperous India is ambitious but his goals to get there appeared practical and focused.

There was little rhetoric, and even less ideology. And it was not a political speech either (after his huge, dominating win, it did not need to be).

Rather than rehash everything he spoke about, I would encourage those interested to listen to his speech and make up their own mind. There are also numerous opinion and analysis pieces published on his speech.

I cannot pinpoint any single item that stood out above others, but as he spoke about what India could be, it was hard not to hope that that country could indeed reach those heights. There was never any doubt about the country’s potential but it has been depressing to see recent governments completely fritter it away.

The way Modi spoke about what he aimed to accomplish for India gave any listener who cared about the country, a lot of room for hope.

But more than that, there are many conditions that exist today making this about more than simply “hope” –

Modi has demonstrated that he is a hard-working, shrewd, proud and ambitious politician. He clearly has no intention of failing. He also very clearly wants to demonstrate through leadership and action the making of a new India that its citizens can be proud of. His work ethic and his apparent dictatorial modus operandi are characteristics that will help rather hurt towards accomplishing his objectives.

In spite of his Hindutva history, it’s hard to imagine that he will ever again open himself to that kind of scrutiny or criticism on the national or global stage where he now is a prominent figure. He not only wants a long and successful reign, he wants to be recognized as one of the greatest leaders India has ever had. You can see that too, can’t you? Ambition, pride, ego just oozes out of his pores. For a highly intelligent individual, that means being very mindful, prudent and judicious in word, thought and deed. He has to want to bury his ugly history forever! And that gives me hope too.

In that speech at MSG and in the others he gave to the UN, he spoke as a man with a mission. Given that he is virtually unopposed in the highest political seat of power in India, he also has the wherewithal to pull off a whole lot of what he aspires to.

A few days after that speech, I happened to meet someone from New Delhi who works closely in the central government circles there. He told me just how much things had changed there. Anyone who works for Modi – from Cabinet secretaries to clerks – were working harder than ever before. Many of them stay in their offices now until 10 and 11 pm at night, well past normal working hours, to get their jobs done. The governance and discipline that people are witnessing now has rarely been see before.

This is after all why a government exists – to serve the people. But how much service have the people of India seen in the last few decades?

Ultimately, it’s really not so much that I have become a fan of Modi.

It’s that I have become a fan of the vision he is painting for the country, and that after a long time, he appears to embody the type of leadership and power that promises glimmers of great possibilities – the possibilities of making  that vision for a growing, prosperous India that offers a myriad of opportunities for its citizens, a reality. So many are so very tired of the alternative that we will grab at any bright spots that appears on the horizon. Fingers crossed! 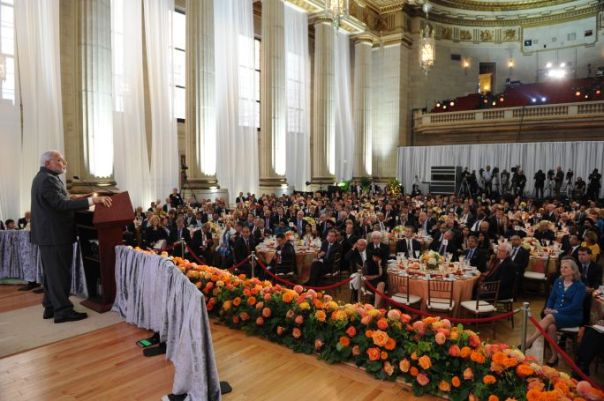