Who is Rahul anyway?

The land of the Maharajas banished the idea of Maharajas early in the 20th century.  That does not mean that royalty is dead in democratic India. Witness the crown price and heir apparent of the Congress party, Rahul Gandhi.   In some circles, it appears that it is not so much a matter of “if“, but more one of “when” he ascends the throne, i.e., becomes the Prime Minister of India. As you can imagine, there are at least two diverse points of view on whether this would be a good thing for the country or not. But, based on what? History perhaps and family heritage, the party he belongs to, definitely, but what about him, as an individual? 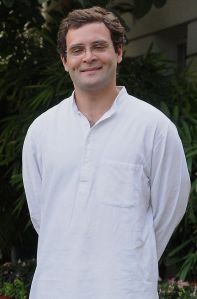 When I first thought about writing this post, I thought it would end up being very interesting because it would be a learning experience.  Most of these posts demand that I find out more about the topic at hand because I just don’t know enough. So, finding out more about the crown prince of India ought to be fun, right?  Wrong.

You know why?  Because there is very little information that is interesting and more surprisingly, just very little, period.

For someone who belongs to the Gandhi family – great-grandson of Nehru, grandson of Indira Gandhi, son of Rajiv and Sonia Gandhi, and heir apparent, there is surprisingly not very much that one can gather from media archives. Google’s answer to “Rahul Gandhi Interview” pointed me to two, yes just two, interviews. Both were from circa 2004-05; I believe that was around his launch into politics.  Let me tell you, they were pretty light.

Oh yes, I know the basic facts – that he is 41 years old, leader of the Indian Youth Congress, general secretary of the All India Congress Committee and Member of Parliament. He contributed to Congress winning various seats across India during the last election, including those of some hand-picked candidates of his own. He gives an aura of contemporary thinking, change, and working for the aam aadmi (ordinary man).

But is that just an aura?  Darned if I know! I can’t tell what he thinks and believes in, what his philosophy is, what his strengths are or his weaknesses.  Is he a good leader?  And, if so, why? What does he really aspire to and what are his goals and objectives for himself and for India? I have been unable to find any columns where he has expressed any opinions. There are too many unknowns, and this after the man has been in politics for a few years now. Is this a deliberate obfuscation of facts? Or are there simply no depths to plumb?  I just can’t tell.

One Q&A from the dated interview I reference above goes like this – Q: What is your mission as a politician? Rahul’s Answer: I will create a new brand of politics in India. Just wait and see.

I don’t think I am overstating anything when I say that the time has come to learn more about Rahul Gandhi – the individual, the politician, the potential leader of the county.  Something with depth. There’s a perfect opportunity in front of him – the crucial fight for winning UP back for Congress during the next election. There’s been some noise and movement by him in that direction; perhaps it will turn out to be his first (real) moment in the sun. Indeed, that would be something to look forward to.

But for now, so much for this post about Rahul Gandhi.  Enlightened you, did I?  I can’t say the same for myself. It’s a shame, because I was looking forward to learning quite a bit about the Gandhi scion.

It’s time to set this aside and move on to more stimulating and interesting topics, while hoping this one gains depth and breadth over time, and that I can, in fact, return to it someday.