After years of flying various airlines in the US and watching them get shoddy and shoddier in service, I always find it a pleasure to fly the airlines in the East.  The best example of service continues to be Singapore Airlines.   In one word, fabulous.   Others that make a mark with their customer care include Thai, Malaysian, Air Nippon, Air China and of course Emirates.  In India, I have seen this service difference (compared to US airlines) in both Jet and Kingfisher; today, they are the most prevalent full-service airlines serving the country.  You can’t really go wrong with them (except perhaps on pricing when flying to Delhi). 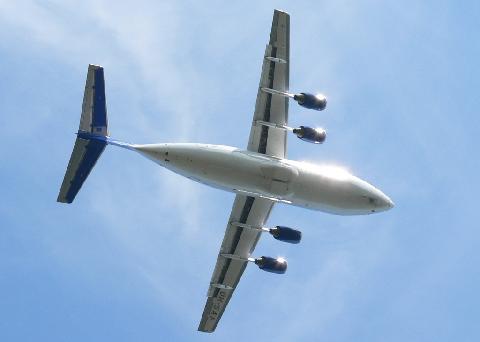 In addition to these, one upstart airline that I have had the pleasure of flying to domestic locations recently is actually a low-cost, no-frills carrier.  The one I speak of is called IndiGo Airlines.  In keeping with the name, all the flight attendants dress up in a smart indigo cap, a corsage/scarf thingy and a chic gray dress (more about this later).   The airline itself reminds me a lot of Southwest Airlines – one of the big success stories of the West.   It may be low in cost, but it is high on service, efficiency and consistency (to keep the costs down, for example, they standardize on one type of aircraft).

They particularly excel on being on time.   This has to be the most on-time focused airline I have flown.  Clearly, it is the top objective for them.  And, I have noticed that the staff at all levels – check-in, ground and in-flight take extra care to keep or beat the published schedule.  It is almost as if this is a mantra that has been brain-washed into them.  Come to think of it, it probably has.  They pride themselves in what they call “Indigo Standard Time”, and pat themselves on the back and in their in-flight announcements when the flight touches down on or before their schedule.   It’s a great way to communicate and market their prowess in this area and I salute them for it.

[Sidebar: Often I have seen where executive management (of any business) creates key objectives for the staff to execute.  Once they have been successfully accomplished, management forgets to make a big enough deal of them – internally or externally.   Big mistake.  Success feeds on itself and communication is essential to ensure that everyone knows how successful you have been.  It’s funny and ironic how quickly and broadly failures are communicated though; what, they want them to multiply?  ]

The staff of IndiGo – like most other airlines in India – is very (I mean, very) young.  They appear to be trained well and they work hard.  An interesting observation about their dress and style –  like I said, they have smart uniforms and all the slim (without exception) flight attendants make those uniforms look good.    They also appear to have very strict standards on makeup – everyone wears the same shade (made by the same brand, I am sure) of bright pink lipstick, and their eye makeup is applied just so.   The eyes are exaggerated through what I would call ’70-80s style eye makeup – a bit retro and dramatic with thick liner and a lift at the corner like an old-times heroine (Hollywood/Bollywood  – take your pick; Audrey Hepburn or Sadhana).  Imagine this carefully crafted look being so very consistent, from person to person in the cabin.   I didn’t notice any male flight attendants on the IndiGo flights I was on, but in any case, I will assume that these standards are only for the females on the team. :-)*

But that’s not all.  The next thing I noticed was one gal who had a pixie-like blunt haircut.  It looked kinda cute and she did too.   I didn’t think too much of it.   Until a bit later, I saw her again.  Except this was a different flight attendant.  I literally thought there may be twins serving on the same flight.  And then I looked closer.   They were the same height (and of course the same build), but twins they were not! 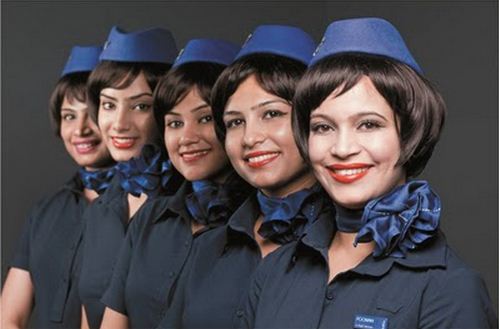 Would I kid you? (Photo courtesy of bangaloreaviation.com)

No two people’s hair can look so much alike, I don’t care what standards they follow.    Then, I realized what was going on.   These girls were wearing wigs!   Wow!  If that doesn’t take the cake, I don’t know what does.   I’m not exactly sure what the reasoning behind this is – whether it was someone’s great idea of making hair part of the uniform, or whether it was for reasons generally related to grooming, but I have never seen anything like it!

Just to be sure, on the return flight, I looked out for the pixies.  Sure enough there were two of them.   Strangely, it was not all of them.  What gives?

It made me curious enough to check it out…with google, of course.  So,  it wasn’t my imagination after all.  Check out this September 2010 article when their new uniforms were announced.  It’s aptly titled: “She’s a hair hostess!”

Seriously, my kudos to IndiGo Airlines for its focus on efficiency, as well as for its business strategy and customer service.  I believe it is shaping up to be a serious contender in the local aviation market.  But, man, the wigs gotta go! 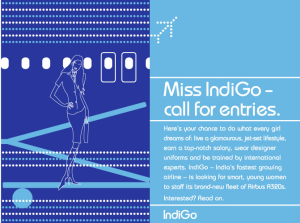 *P.S.  I checked out their website later and saw their recruiting pitch for new cabin crew – they’re promoting the chance to be “Miss IndiGo” to their prospective recruits.   I would guess that leaves the guys out as far as cabin crew goes.