After living in Bombay and reading the newspapers there every day for a couple of years, it comes as no surprise to me that Indian women can be recognized for their beauty. And their brains. I used to often see pictures of stunning Indian women on the runway, in the movies or competing in various beauty pageants there.

So, the fact that an Indian could win a beauty pageant…big deal! Aishwarya Rai was Miss World and Sushmita Sen Miss Universe back in the days after all. And there were more as well. 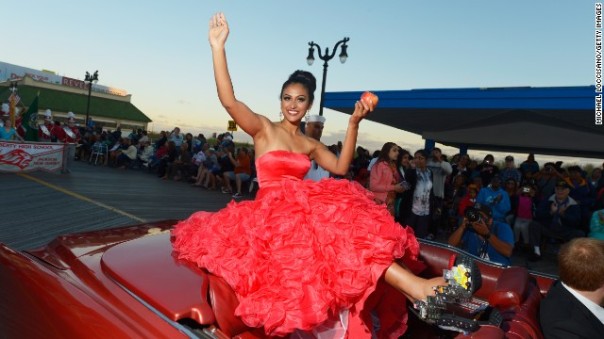 However, what gave everyone pause was that this particular Indian-American became Miss America, not Miss India nor a Miss “global”. It gave people pause – the many admirers and the few haters.

For the admirers, it was that this country was open and liberal enough that it could choose someone who looked so different from a “classic American” to be crowned as its beauty icon. The runner-up was also of Asian descent, Stanford graduate Miss California, Crystal Lee. And prior to this there have been other ethnic minorities who have won the competition, which is subjective at best.

[Now whether a country should even have a beauty icon is a topic for an entirely different discussion…].

For Indians here, it was the novelty of recognition beyond and so different from spelling bees, IT outsourcing, engineering and medicine.

The few haters, well, they had some hateful things to say but do we really care what ignorants, racists or bigots may think? They have already been given too much press, in my opinion. Best to just laugh it off as the exception that prove the rule.

The American cliche of everyone being equal, no matter what their origins, quietly and not so quietly continues to gather strength. For all of its faults, America is beautiful. And that is one reason why so many of us are staying put.

And here’s kind of the icing on the cake. There were comments from Indians who said that an Indian as dark skinned as the new Miss America would be hard-pressed to become Miss India, in a country that worships fairness. That’s food for thought. True but painful to hear.

Back to America…..did I say it? A country, for all of its faults that is beautiful enough for many of us. It’s all relative, isn’t it?

Posted on September 22, 2013, in Back in US, india, United States, US and tagged an indian-american beauty wins Miss America 2014, hateful comments about Indian-American becoming Miss America, Nina Davuluri is Miss New York and Miss America. Bookmark the permalink. Leave a comment.