Modi and The Trough of Disillusionment

A couple of weeks ago, I landed safely in the torrential downpours of Mumbai, in the midst of one of the worst/best monsoon months in decades. The aromatic city was experiencing record breaking rainfall. There was no let up to the unique scent of the city either and as soon as I exited the airport, a heavy curtain of humidity smacked me in the face and tragically destroyed my hair.

Par for the course. None of this was surprising or unexpected, it simply awakened memories of a couple of other soggy and muggy seasons that one can only find in the incomparable Mumbai. Seasons that I had actually managed to live through.

The next day, I woke up to the Indian TV channels showcasing the Prime Minister (PM) of India setting all kinds of world records with yoga.  It is now in the record books for all to see – the largest yoga lesson in the world involved 35,985 participants at an event organised by the Government of India (personally driven by the PM) on the occasion of the first International Day of Yoga (also personally driven by the PM) in New Delhi.

It was yet another superb public relations victory for the just over one-year old PM of India – the rare, the uncommon, the one and only Narendra Modi.

Don’t ask me why but I am incredibly interested in politics and always curious about people’s opinions on the topic, whether here or there. So during the few days that I was in India, I had to ask the question.  It was the same question for every one I had the opportunity to meet, especially in Mumbai, the financial capital of India. I was genuinely curious to hear the unvarnished opinions of people I knew – these opinions usually bear very little resemblance to what we read in the news, and there’s nothing quite like that firsthand interaction.

My question, which I repeated several times during my short visit was – “So, how do you think Modi is doing?”

After all, it has been over a year since he was crowned PM with a clean and victorious sweep across India and amidst the most positive of expectations and ambitious of mandates. Not really hard to contemplate, given the excruciatingly dismal and corrupt rule of the Congress government over two atrocious terms in office. That was what the people of India were trying to get away from.

If there was one representative emotion above all during his election victory, it was embodied in the word, Hope.  [But let’s not get too ahead of ourselves and start comparing him to Obama, please].

So, just over a year later, what do people think?  Here are some of the responses I received from a diverse cross section of avid supporters and non-supporters:

“Give him some time. At least, corruption is down”.  [Not sure how this is measured but that does appear to be a prevailing sentiment that this government is not as blatantly and hugely corrupt as the previous one].

“We’re tired of waiting for change”.

“Modi has been true to form”.   [This was not a positive opinion].

“He’s realizing that governing India is not the same as governing Gujarat.  He cannot control all the states and local governments which is where the man on the street is actually affected”.

“We have to be patient”.

“He’s busy trying to suppress his dissenters, even those in his own party and administration. He does this by finding something shady.  And squeezing.”

“It is disturbing that we don’t hear anything from his next line of leadership. All media interactions are carefully choreographed”.

“What (or who) is a better alternative?  Rahul Gandhi??!“

When I followed up with specific questions on what they thought had been accomplished so far, it was hard to get any specific answers.

Sadly and perhaps most telling was the disappointment in the eyes of the most passionate (past?) supporter of Modi with whom I admit I have been known to engage in loud and violent debates, way back when.

“This is India. I thought Modi would make some big changes.  India cannot change.”

Most interestingly (and I never thought I would say this), despite all my misgivings, I actually have a more positive view about Modi and his potential to transform India than he does. Huh. This is shocking to me. Am I  eating some of that P.R. dog food that is being thrown around so liberally?

But based on the various opinions I heard during this trip, it appears that Mr. Modi’s PR juggernaut is not all that it is cut out to be. In fact, it needs some serious work.

Sigh, I also doubt that I will be downloading the official Narendra Modi app anytime soon. Seriously!  Did I just say P.R.?

Also see: What can we learn from Narendra Modi’s PR style? January 2015

Tags: modi and international yoga day, narendra modi and his PR machine, the accomplishments of Modi as PM

During my recent trip to India, it was work, work, work all the way. Well, almost.

It’s up to us to ensure that life is balanced after all, so I deliberately carved time out for other activities. Therefore, all that work didn’t keep me from a wee, little bit of fun. Or some serious shopping. Or a couple of loud and impassioned political diatribes with friends and family (they’ll never invite those again!). Or  the payment of some weighty debts.

Those debts are interesting, to say the least.

I have told you before, there’s this temple in Khar, Mumbai I feel like it’s come through for me more than once.

And it hasn’t really stopped coming through. At the end of the day, it’s really what you believe, isn’t it?

For being such a frequented destination for some in Bombay – there’s always a line of people waiting to enter – the temple itself is a very modest, peaceful dwelling adjoining a neighborhood park and an ode to Hanuman. It has no doors, just thousands of bells of all sizes hanging all over its ceiling and pillars, bells that have been contributed by (I assume) gratified devotees over the years.

The Hindu god, Hanuman is known for, among many other things, being the repository of incomparable strength and the one capable of liberating (mere mortals too) from dangers. 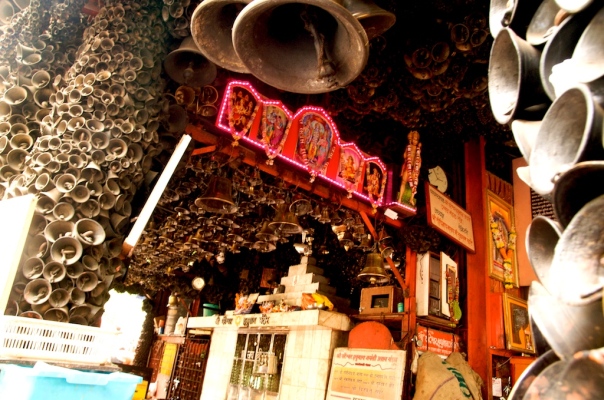 Well, my debts to this Hanuman had been piling up over several months, from earlier visits that I had paid to the temple, mostly from when I was a temporary resident and expat in Mumbai.

So much so that on the one free Saturday that I had in Mumbai recently, I set off to “my” temple again.

But before I got there, I had to make a crucial stop – to purchase the bells that I would deliver there, with much gratitude. Yes, that’s “bells“. In plural. Not one or two, but six of them in all. That’s right, six.  One for each fulfilled wish made on behalf of important people in my life (uh, that includes one for moi). 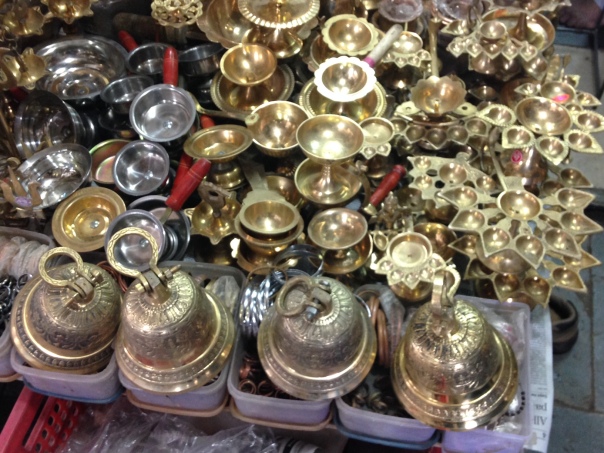 And, here’s the most curious thing of all…I am not (by any means) a religious person. I’m really not. But I do like to pay my debts, real or imagined. Who doesn’t?

And in that moment, with the liberating feeling of having satisfied these past obligations of mine, I completely missed invoking any new wishes or desires at the temple.

Now, I’m rather glad that I restrained myself. No sense in getting too greedy so soon. There’s time enough for new aspirations to be gathered up for another visit. Isn’t there?

Tags: a bell for every wish fulfilled, expat in mumbai, ghanteshwar temple in khar mumbai