Journey From Home to Home

As journeys go, this one was pretty uneventful.

Saying goodbye to the nest I had created for myself was tough. Tougher still were my farewells to my very best Mumbai buddies – so many good times we had together!

My neighbor on the first flight out of Mumbai was an elderly Indian gentleman who lived in the deep South like I did. This had been a quickie visit to India for him for a family wedding, a trip he had made after a five year interval. He was astonished at the changes he saw in India, everywhere he went.

When I told him that I had been based in Mumbai for a couple of years, he shook his head and said, “I don’t know how you did that! No way I could live there!”.  He had just spent the day in Mumbai. One day and he had reached this conclusion!

Meanwhile, I’m thinking to myself, buddy, what do you know? I wouldn’t trade this experience I’ve had for anything!

I began telling him about the Mumbai of my experience. My, but I was getting so defensive! What was happening to me? I had known and lived surrounded by all the dirt and smell that was typical of Mumbai. I should have been echoing his thoughts but instead I was up in arms, the emotions of my departure getting the better of me and dominating my feelings now. 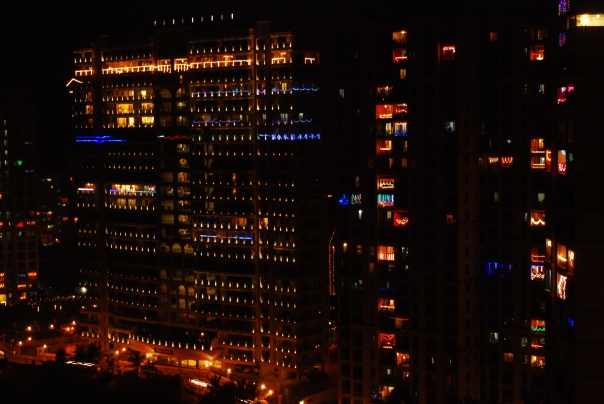 My home in the U.S. had not gone anywhere – it was waiting to welcome me back. This particular time was the longest interval I had stayed away during my two year sojourn in India. Approaching six months…come to think of it, in all these years (decades!) of living in the U.S., this was the longest stretch of time that I had been away. Ever. I just realized that and it made me long to get back, more than ever.

So, what was it like getting back home? For one, there was really no adjustment period at all. The warmth of my real home enfolded me like a blanket. In spite of the chilly winter cold. Here I was, in no time at all, back to shopping for groceries, back to all the house work and muddling my way through the kitchen. Back to a chauffeur-less car, driving in the comfort of my own car on the clean, pothole-devoid roads of my home town. Getting back home. To new beginnings.

So, it was that easy then.

Meanwhile, I received an email from my assistant at the office in Mumbai.

Every day, without fail, as soon as I reached my office and before I had time to even turn on my computer, a cup of fresh green tea would magically appear, brought to me by one of the pantry staff.  She wrote in the email that this past week on Monday morning, the same person carried a cup of green tea, as was the usual custom for two years, to my office. It wasn’t until he reached my office door that he remembered that I was not there anymore. 😦

Thank you all! I won’t ever forget the wonderful ways that you were there for me through these past months. You helped me truly feel welcomed and ensured that I was in a home away from home.

This is why I was so up in arms when that gentleman made derogatory remarks about living in Mumbai. Poor fella, he had no clue because he hadn’t experienced the people that I had. And ultimately, you know that that’s what made the goodbyes so hard.

Posted in Back in US, india, Mumbai, United States

Tags: expat in india, experiencing Mumbai, Home again, living in India, moving back from India to US