← Yikes, That Was A Close Call!
India Waits →

I started yoga later in life than I wish I had and when I did, I simply fell in love.

It helped that I had an awesome instructor and developed a virtually break-free habit.

It helped that my yoga tutor showed up at my doorstep at 6 a.m. most mornings.

It helped that I had a yoga buddy.

It helped that I was in the birth country of yoga and had promised myself that I would learn something new during my temporary two years there.

And then I returned back home to the USA.

I just couldn’t get myself to practice yoga. There was no personal, home-based instructor. No yoga buddy, no pattern established, no inclination to start, too much travel, too transient a stay in a single place, too much work, yada, yada, yada…excuses upon excuses, they just kept multiplying.

I missed yoga like anything but couldn’t get myself to do anything about it. 😦

Enough is enough. I gave myself a talk a couple of months ago. One of those tough talks. Clearly my mind was messing with me. There would be no more excuses. No more BS. I was determined to start my yoga again and keep it going.

I set myself a new goal: Do a few minutes of yoga every day. Without fail. No weekend passes. No holidays.

It would be the first thing I did every morning. No matter where in the world I was.

That’s the nice thing about yoga – all you need is some floor space, a yoga mat or carpet, and you’ve got all the equipment you need to practice and practice well. Plus a pinch of determination to start the practice, and to keep it going.

To make it easy on myself, to ensure follow-through and cut through the “no time” BS excuse, I gave myself a short 15-20 minute daily yoga goal rather than an hour. I actually started with 10 minutes. That’s a challenge that anyone can overcome.

But what a challenge that first 10 minutes was! Tough, tough, tough – with a hugely, inflexible body and fat in new places warping all my poses, what did I expect? But I persisted.

Day after day after day, for the past 70 days (but who’s counting?) without fail, I have practiced my (“petite”) yoga every morning. It’s not much, yet it’s a lot. Twelve Surya Namaskars – that makes 840 so far.  But then, who’s counting? Each Surya Namaskar has 12 yoga poses, so that’s 10080 asanas so far.  Hmmmm, not such a bad idea to keep counting.   🙂

Finally. A new habit appears to be forming.

Something else has helped me with this new convention – help from background music. Every day, it’s the same music (I did say “habit”, didn’t I?). I play Suprabhatam (a Sanskrit poem that is chanted at dawn at Hindu temples). There’s something soothing yet invigorating about it.

This has become such a regular pattern that now it’s likely Pavlovian. Watch out, if I hear this chant elsewhere, I’ll start performing Surya Namaskars, and you’ll know it’s that yin-yang woman. There are worse things that could happen…

It’s not a done deal, but at least a new journey has begun again. And by writing it down for even one other person to read, I expose myself indirectly extending and enhancing that commitment of mine.  Trust me, I’ll take any help I can get – just to keep this routine from getting interrupted ever again. I’m trying to get addicted here and am possibly half way there.

Remember the grace of Surya Namaskar? This awesome performance is still the best video I have seen so I share it again: http://www.youtube.com/watch?v=zVrj2bDnddw

I also found another visually stunning video of Surya Namaskar. Click on the picture below to watch. 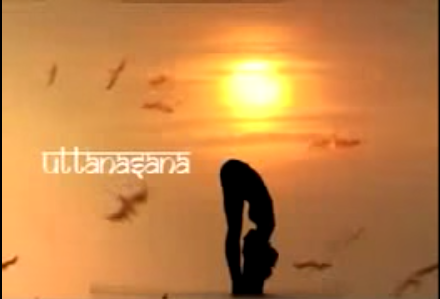 Now, you go get yourself some yoga – you won’t regret it.

Posted on May 4, 2014, in Back in US, india, yoga and tagged restarting the practice of yoga, starting yoga after a gap, the grace of suryanamaskar. Bookmark the permalink. 1 Comment.

← Yikes, That Was A Close Call!
India Waits →